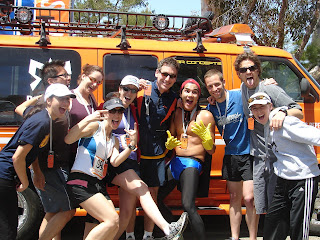 Almost five years into my running "career," the thrill and excitement of a race has diminished. There really is nothing to match your first marathon in terms of joy and pain. Not to say that I don't enjoy running races now, but just that it no longer has the cachet it once had.

However, this past weekend I participated in a race that reminded me of the crazy entertainment value running can have. Ten brave souls from different orbits of my running circle participated in the first ever Ragnar Relay Los Angeles, a 178 mile relay from Santa Barbara to Dana Point. A great time was had by all. Not only that, but we also wound up doing well. Our team, Relay Relay Ridiculously Good Looking, finished 19th out of 105 teams and finished third in the "Open-Mixed" division. We crossed the finish line in 20 hours, 22 minutes.

Unfortunately the race wasn't exactly 178 miles. At the last minute seven legs had to be cancelled because of permit issues. It didn't affect my legs, but the runners in Van 1 had to reshuffle. It didn't detract from our enjoyment, though.

I was runner #7, the first runner in the second van. I actually had the ideal legs. My first two legs were the longest of the whole group until the last six legs. I ran 7.7 miles for the first and 7 miles for the second. Then for my last leg I ran a quick 2.8 miles along the Huntington Beach bike path. Basically I got to finish easy. Andy and Katie weren't so lucky. Andy had to run a hard 10.2 miles in Huntington Beach for his last leg and Katie had the unenviable task of running uphill for over 8 miles along the 133 highway leading to Laguna Beach in the middle of the day. They both rocked it, though.

As for me, I did better than I thought. I ran my legs fairly fast considering I hadn't jump started my training until three weeks before. I ran the first two legs at a surprising 8 minute pace. I thought I'd be lucky to run a 9 minute pace for both. The last leg was accomplished at a respectable 7:10/mile pace, which is comparable to my previous 5K paces--and this was done after having already run 14.7 miles in the last day and barely getting any sleep.

I had a terrific time riding down south, cheering friends on and checking out the gorgeous ocean views. We couldn't have asked for better weather too. I was on such a high the whole weekend. When I finally got home on Saturday night I crashed and slept for almost 12 hours. I'm already looking forward to doing this race in the future.
Posted by Unknown at 3:45 PM No comments: I've been riding Metro regularly for almost a year now. I moved to Koreatown in June and started taking Metro to work and other places then. In that time I've ridden all hours of the day--early, midday, night, late night--and nothing exciting happened. I'd hop in the train or bus and sit quietly until I got to my destination. Every ride had been uneventful, save for the smelly homeless person or the self-talker.

Then there was today.

Wednesday usually means trivia night, but tonight I skipped trivia and took Metro to Pasadena to have dinner at Houston's with the family. I squeezed myself into a Union Station-bound train and took a spot in the aisle towards one end of the car. No sooner had the train started towards Civic Center when I heard a familiar, retching sound followed by a splash. The space that quickly opened up in the crowded train and the gasps confirmed the disgusting event. A passenger had thrown up. It was easy to spot the culprit as he stood there alone, pale-faced by the door, wiping his mouth with his sleeves. As anyone who has thrown up can attest, you don't just vomit once. Sure enough, more vomit from the poor guy. Everywhere you looked was a disgusted face. Some passengers covered their nose and mouth with the books they were reading, and others declared that they were getting off.

I understand that being in close proximity to vomit isn't desirable, but do people really need to make the poor guy feel even worse? It's easy for me to act all high and mighty when I wasn't the one whose shoes got splattered with vomit juice, but I felt bad for the guy. I doubt he wanted to throw up in a crowded, shaky train. It just happened. When we finally made it to Union Station I asked the guy if he was OK. He just shook his head and ducked out of the train.

On the ride back home after dinner, I became fascinated by one of my fellow passengers. The guy was dressed like he had just come from a round of golf. He read the sports section with the aid of a pair of broken glasses, missing one of the temples, which he had to hold up to his eyes to use. What made it more interesting was that they were women's glasses. When he tilted his head I saw the glasses were embellished with florets at the corner.

I was studying the guy when something caught my eye in the car in front of us. A woman was pressing the emergency button over and over again. An African-American man moves towards her and a guy in a red soccer polo jumps in between them. The woman keeps frantically pressing the emergency call button and the two men appear to be struggling. The guy in the red keeps pushing the other guy away, away from the woman. It looked like they were grasping each other's hands and were engaged in a wrestling match. The guy gets away from the guy in the red and lunges towards the frightened woman, who backs towards the middle of the car. The guy in the red keeps pushing. As we're approaching Wilshire/Vermont the African-American passenger goes through the doors that lead to our car. I got scared. What was going to happen? The guy in the soccer polo follows him and yells something about a guy in a gray sweater and that the police had been called. When they made it to our car I noticed that the African-American guy had a cut on his forehead. When the doors opened at Wilshire/Vermont, the guy with the cut exits, followed by the guy in the soccer polo who continued to yell something about the police. I'm not sure if the guy got that cut during the altercation or if he had that when he boarded. He looked strung out, so it's possible that he wasn't completely there.

After a while I couldn't hear them. The doors closed and we headed towards Wilshire/Normandie.

Vomit and violence. Don't it make you want to go Metro?