02 "I Need Some Fine Wine And You, You Need to Be Nicer" - The Cardigans

Posted by Unknown at 8:34 PM No comments:

I've been on a Cobb salad kick lately. I don't eat it every day, but when I inevitably crave one it's the Cobb salad that I fall back on. I'm generally not a big salad eater for the reason that I'm hungry soon after eating one. It just doesn't satisfy me. Cobb salads, though, are heartier, and I think that's why I favor them.

As way of history, the Cobb salad was invented by the Brown Derby, a location of which used to stand a few blocks from my apartment. The legend follows:

from Aurthur Schwartz of the food maven

"One night in 1937, Bob Cobb, then owner of The Brown Derby, prowled hungrily in his restaurant's kitchen for a snack. Opening the huge refrigerator, he pulled out this and that: a head of lettuce, an avocado, some romaine, watercress, tomatoes, some cold breast of chicken, a hard-boiled egg, chives, cheese and some old-fashioned French dressing. He started chopping. Added some crisp bacon -- swiped from a busy chef.

"The Cobb salad was born. It was so good, Sid Grauman (Grauman's Chinese Theatre), who was with Cobb that midnight, asked the next day for a 'Cobb Salad.' It was so good that it was put on the menu.

"Cobb's midnight invention became an overnight sensation with Derby customers, people like movie mogul Jack Warner, who regularly dispatched his chauffeur to pick up a carton of the mouth-watering salad."

I'm not enough of an expert to say which place has the best Cobb salad, but the one I had at the Nickel Diner recently was very good. Today I'm having Mendocino Farms' take on the Cobb. It's not a traditional Cobb salad in its ingredients (turkey instead of chicken, no hard-boiled eggs) and its presentation (too messy), but it makes up for it with great, fresh ingredients. I miss the eggs, but otherwise this is quite a delicious salad--and surprisingly, I'm feeling full.
Posted by Unknown at 1:58 PM 2 comments:

"Blow out your candles, Laura…"

Thanks to a ticket giveaway on KCRW's Facebook page, I got to see the production of "The Glass Menagerie" currently playing at the Mark Taper Forum in downtown. After a quick delicious Friday Happy Hour dinner at Spitz in Little Tokyo, Jane and I headed over to the Music Center for an evening of classic theater. What a great production. "The Glass Menagerie" is my favorite Tennessee Williams play, but I haven't read it since high school. After seeing tonight's performance I'm eager to find my old textbook and give it another spin. It's the first time I've seen the play performed, and the experience is revelatory. Reading a play the only voice that you hear is your own, but seeing it performed, you are treated to a multitude of perspectives--the actors, the director, even the guy around you who feels free to make comments during the performance.

In my mind I've always imagined Amanda as being a haughtily out-of-touch, but Judith Ivey portrays her as almost a ridiculous, silly woman who is trapped in the past. Wearing an old dress that I'm sure at one time enhanced her youth and beauty, she instead looks rather comical, like Bette Davis in "Whatever Happened to Baby Jane?" It's both funny and sad. Ivey gives an amazing performance. What could easily be a detestable, annoying character is instead rendered heartbreaking and sad. We see all our mothers in Amanda, one who would drive us insance if only we didn't love her so.

Keira Keeley as Laura is almost too fragile, but if she were less so the ending wouldn't be so powerful. Fragile she may be, but there is also a hint of resilience in her performance. Keeley's Laura may linger in corners but she has tremendous strength enduring the tribulations of her life.

As Tom, Patch Darragh is far from how I imagine Tom being, but Darragh sold me with his performance. I always saw Tom as an ordinary guy full of bravado, but Darragh portrays him as a little bit fey and downright mean. He's not a guy who merely wants adventure, but one who truly despises his life. In his performance, Darragh emphasizes that the bigger tragedy isn't that Tom abandoned his family, but rather that after having escaped his obligations, the responsibilities that weighed upon him, Tom is still nowhere. He's no better off.

I almost forgot to mention Ben McKenzie, star of "The OC" and "Southland," as Jim the Gentleman Caller. He is surprisingly good. Having really seen him only in "The OC," "Southland" and "Junebug" where he played variations on the stoic, dour type, it was refreshing to see him so physically and verbally loose. He did a great job as Jim, playing the all-American type who hasn't quite lived up to his potential but isn't giving up. He has some clumsy stage moments, especially early on in his interchange with Laura, but once he settles in the interaction between the two of them is lovely and affecting. He accomplishes the role's requirement of representing the ever-hoped for future, and even when he has to let Laura down you appreciate his straightforwardness and the ability to--at least for a moment--awaken Laura. McKenzie just seems a tad too young to be playing a guy on the verge of cresting that hill and will soon be considered over-the-hill, but he does a very good job of embodying Jim's enthusiasm and downright decency. McKenzie holds his own with the other three actors who have just about perfected their characters.

Again, this is a terrific production. Highly recommended.
Posted by Unknown at 12:14 AM 3 comments: 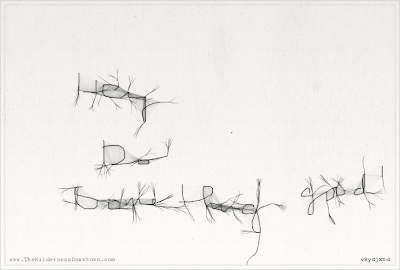 The music video for Arcade Fire's "We Used to Wait" is unlike any other video before. For one thing, it's interactive, and for another it utilizes Google Earth in spectacular and emotional ways. Check it out for yourself and make your own video.

Here's the video I made.
Posted by Unknown at 2:22 AM No comments: