07 "I'm Not Living in the Real World" - Belle and Sebastian 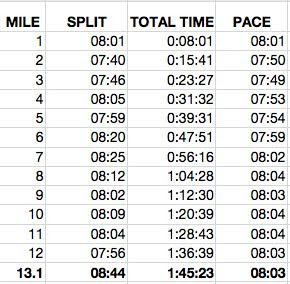 I didn't turn in a personal best at the Los Angeles Rock n Roll Half Marathon, but I'm happy with my performance nonetheless. I hadn't trained enough, and the course was tougher than I remembered. There were a couple of demanding hills including a cruel one at mile 10 that had me feeling lightheaded as I ran up it. So for all that, it was a good race. It's the fastest half marathon in a couple of years and my third or fourth fastest ever.

With the downhill start I took off at a fast clip, running the first two miles around 7:50/mile. The fast start also prevented my legs from fully warming up and soon my calves were feeling stiff and seemed to not want to loosen up. I feared that it would remain stiff and even cramp up before I even reach mile 10. Thankfully, after 7 miles the calves loosened up. By then, though, I had settled on my 8:00/mile pace and stuck to it.

Apart from the tight calves I had no other issues the rest of the race. I did feel the lack of training as my attack of the hills had less vigor and I was huffing and puffing most of the run. It would have been great to finish under 1:45, but I'm just happy that I finished.

The race itself was very well organized. The Rock n Roll organizers really know what they're doing. I hope the LA Marathon folks took some notes. The shuttles were fast and efficient, and the gear check station, with the aid of UPS, were quick and easy. I will definitely do this again. I can' believe I haven't done CIty of Angels the last few years. Hopefully this will be the start of a streak.
Posted by Unknown at 12:43 AM No comments:

My quest to become the paragon of fitness is failing. Then again, I never had a chance at succeeding, but even by my own lowly standards I'm a failure.

Back in July, after running and feeling bonked out after the San Francisco Marathon, I resolved to rededicate myself to running and improve my speed. I had three months until my next race, the Los Angeles Rock n' Roll Half Marathon, so I had plenty of time to train and improve. How did I do?

I still ran, but there was no significant improvement in the quality of my runs. I just ran and didn't work on strength or speed. I essentially maintained my fitness. Sadly, I can't even say that--a week away from the half marathon--that I'm in as good a shape as I was a month ago. I'm going to go into this race really in bad shape. I was running about three times a week until I came down with a cold a couple of weeks ago and a busy schedule coupled with laziness on my part kept me from running. Feeling guilty, I forced myself to run over 10 miles on Saturday morning, the first time I've reached double figures since the marathon in July. I did it, but it didn't feel good and I wonder how it will be this weekend. I have no doubt I can finish the run. It just won't feel good.

As for my run yesterday, it actually went OK. I was tired by about mile 8, but I finished at just over a 9-minute/mile pace. Ideally for the half I would like to be closer to 8 min/mile. I doubt I will be able to maintain that pace in the shape I'm in, but the course is a fast one, so that will help.

This morning I got in a hike with Kevin and Dan up Sandstone Peak in the Santa Monica Mountains--over 7 miles--in the rain to boot. For the rest of the week leading up to Sunday's race, I'm hoping to run at least three more times. That shouldn't be a problem. I can run Monday, Wednesday and Thursday then rest until Sunday morning.

After this race I promise to work harder!
Posted by Unknown at 1:37 AM No comments: How awesome was Arcade Fire at the Shrine Auditorium on Thursday? They were amazing--in every sense of the word. To think I almost didn't go see them! I was going to get tickets when they went on sale, but then I balked. First it was the price, $45+. I hate paying more than $20 for a show, but I had to admit that Arcade Fire now belong to the masses. Demand is high, and I must pay the price. What really kept me from getting tickets, though, was that I didn't have anyone to go with. I figured I could find someone to go later on, and that I should just get tickets anyway. But what if I can't find anyone, then I'd be stuck with a pretty expensive ticket. In the end, I told myself that seeing them enthrall a sold-out crowd at the Hollywood Bowl was enough. I've experienced the Arcade Fire and I can go without seeing them this time around.

Thankfully, a couple of weeks ago, I found out that a friend had an extra ticket, so I snatched the opportunity. I don't know why I even doubted that I wouldn't be able to find someone to go. It's freakin' Arcade Fire! Their shows are a religious experience, rousing and sublime. I won't go into details about the setlist, but they played a fairly even spread of songs from Funeral, Neon Bible, and The Suburbs. The best numbers continue to be from Funeral, though, but songs like "We Used to Wait" and "No Cars Go" are going to be staples in future shows.

The show was on Thursday, but it heralded a pretty enjoyable weekend. I saw "Waiting for 'Superman'" on Friday and then "Let Me In" on Saturday. Both are very good films, "Superman" more for fostering debate about education and "Let Me In" for beautifully adapting "Let the Right One In" and maintaining its spirit and even adding more to the story. Had I not seen "Let the Right One In" I probably would have been more enamored with "Let Me In." It's just difficult not to compare the two when they're so similar in tone and spirit.

The weekend culminated with the beautiful and fun wedding of Dan and Alice. I put on a suit for the first time in a couple of years and had a great time hanging out with the TNT crew. I danced a little and dusted off my Roger Rabbit, the only dance move I really know, apart from the Running Man, but everyone knows how to do that. Weddings are a lot of work, and Alice did a great job of putting hers together. It was lovely, tasteful and fun. I wish I had eaten more cake, though. Congrats, Alice and Dan!
Posted by Unknown at 12:45 AM No comments: 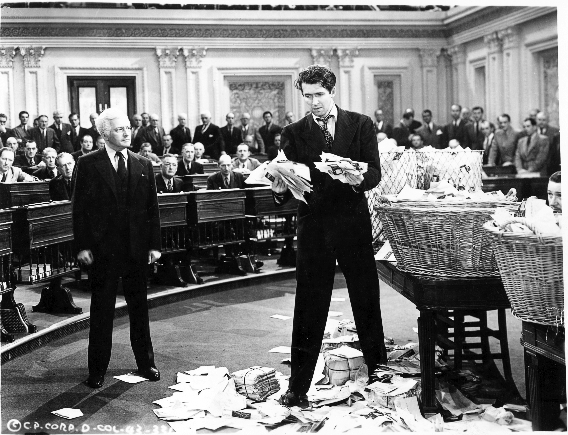 I'm doing terribly at this endeavor. With less than three months left in the year, I have only watched five of the 52 films on my list. Tonight I managed to cross Mr. Smith Goes to Washington off the list. This was a film I have always wanted to see--a deeply beloved classic. TCM aired it this weekend and I sat myself down to watch.

Mr. Smith Goes to Washington is exactly what I expected it to be, an entertaining and empowering piece of political schmaltz. Mr. Smith is too good to be true, and obviously someone as decent and innocent as he will never get elected in today's world. This is a film that would never work in today's very cynical days, but I think even the darkest cynic can not help but be moved to action by Mr. Smith's display of heroic filibustering in the film. If only there was at least one Mr. Smith in today's Congress. I think Mr. Smith Goes to Washington ought to be required annual viewing for members of Congress so that they can realign their priorities.

In technical terms, though, there's not much to discuss about Mr. Smith Goes to Washington. There's nothing groundbreaking about it. What its classic status rests on is its simple but heartwarming story and the power and appeal of the performances by Jimmy Stewart and Jean Arthur. Few people can pull of what Stewart does here, turning a rather dull, innocent of a character into someone appealing. Mr. Smith is almost too good, but Stewart makes us believe that such a person can exist and even be interesting. Stewart's performance takes off when he begins to discover that his fellow senators are not the well-meaning politicians he thought they were. The sense of betrayal and disappointment Stewart communicates through his eyes is heartbreaking.

My favorite performance, though, is Harry Carey's wry portrayal of the President of the Senate. With his bemused smile Carey creates a character who is pragmatic but not so broken that he fails to see the decency and strength of purpose displayed by Mr. Smith. The enjoyment he gets out of seeing the young senator filibuster and prove everyone wrong is one of the film's biggest delights.
Posted by Unknown at 11:26 PM No comments: