Additional Notes from the 2011 LA Marathon

As a fan of trivia, I really dig how RunPix breaks down your race. Some of the details are a huge ego boost. My favorite notes:

-in the last 4.5 miles, I passed 395 people but was only passed by 27 runners. Yeah, take that!
-I was in the top 20% of all men and in my division. That could improve, but still good to know I was faster than 4 out of 5 guys.
-My average speed was 6.8 mph. I'll set a goal of doing 7.0 mph next time.
-I was still in West Hollywood when the winner crossed the finish line.

Also, here are some pics from the race. The rain really makes it look dramatic. The raincoat I'm wearing is part of my fall collection inspired by bags of dead leaves I saw on someone's front lawn. Isn't it slimming? 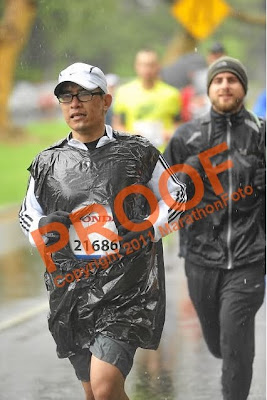 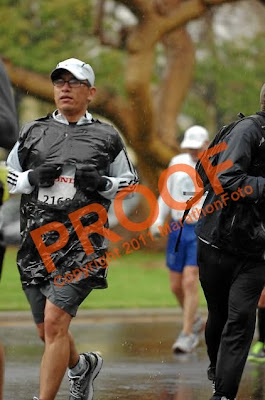 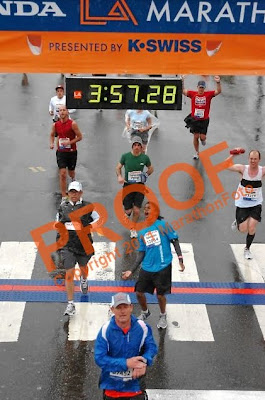 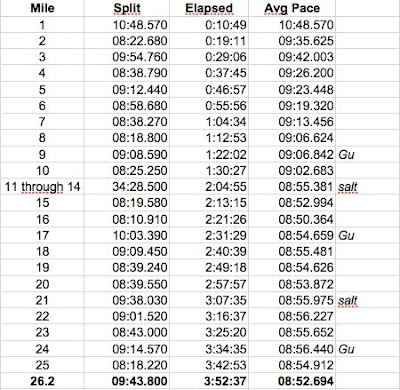 Marathon #12 is done! Still no new PR, but this was my fastest Los Angeles Marathon yet, beating my previous time from 2007 by exactly two minutes. This was also my second fastest time ever. It's almost a minute faster than my Seattle time but still three minutes off my personal best in San Diego in 2007.

I guess the best word to desribe my running the last four years is consistent. My marathon finish times have been within ten minutes of each other, with San Francisco's 4:03 marking my low point since 2007. Not a bad thing. It totally reflects my training the last few years, which has consisted of "maintaining" my fitness. I basically get the miles in that I need to finish the race in four hours. I keep telling myself that I need to do more speed workouts, though. Do I do it? No. I do need to push myself a little more, but I just don't feel motivated. If only I can get faster without trying.

This year's race went as well as it could. The rain really didn't bother me too much. Once you're wet you learn not to dwell on it. I still would have preferred no rain, but what can you do? At least it didn't rain while we were waiting for the race to start.

Looking back on the race I probably should have pushed a little harder because I had juice left at the finish. Looking at my splits above, I was, well, consistent. They took down some of the mile markers due to the wind, so I missed the splits from miles 11-14. I maintained a consistent pace, not running too fast nor running too slow. Usually I slow down the last few miles, but I kept my pace all the way to the end, which again tells me that I could have gone harder earlier. Towards the end my breathing was fine even if my legs were tired. In fact, my fastest mile was the final 1.2 miles, which I ran in an 8:06 pace. Perhaps fittingly, my slowest mile was the first one. Not a bad way to go.

I probably played it too conservatively. I was worried that with the weather that I would cramp up early if I pushed the pace too early. I also took too many water breaks because I was worried about dehydrating. With the rain and the cold, it makes it tougher to figure out if you're becoming dehydrated, so I played it safe and made sure I had enough to drink. Those extra stops probably cost me a couple of minutes.

In the end, though, I can't really complain. I had a great race and felt good the entire time. I enjoyed running in the rain and it warmed my heart to see so many people cheering out in the rain. Running a marathon really does give you hope for your fellow human being. If only people can be as supportive and positive as they are during a race as they are in everyday life, the world would be a better place.

I'm going to end with a short note on this year's logistics. That half mile walk after the finish line to the festival was horrible. It's bad enough to walk that far, even though it probably helped prevent my legs from locking up, but with the weather the way it was, it really made it a miserable experience. Worse was the gear pick up. Last year this was a catastrophe. This year was no different. It looked like the organizers at least took pains to be more organized with the bags rather than just throwing them indiscriminately into a truck as they did last year. But it was obvious when I dropped off my bags in the morning that they needed more pods to house the bags. I'm guessing some volunteers didn't show up because of the weather. There was only one ever-patient volunteer at my pod for the pick-up. Luckily, I found my bag rather quickly. I heard others took much longer.

With that said, though, I want to note how amazing the volunteers were. It's tough enough to run in the rain and the cold, but I think it's much tougher to stand out there for hours. Kudos to the volunteers! And while the finish-line festival was a muddy mess too, the warming buses were an excellent call. Ultimately, the L.A. Marathon did more right than it did wrong. Maybe by next year everything will be perfect.
Posted by Unknown at 4:40 PM No comments: