No PR was set this weekend, but I didn't really expect to. The Rose Bowl Half Marathon, while familiar territory for me since I run the course every weekend, isn't a race to PR in. The trails are too rocky and if you're as clumsy as me, you can risk spraining your ankle pretty badly. I had a small slip once, but I also almost got taken out a couple of times by other runners who lost their footing. There are also spots where you have to walk because it gets too crowded and there's very little space to maneuver. My goal was to run 1:50, but after not running for a week, I lowered my expectation to under two hours, so I'm happy with my 1:52.

I was a little surprised that I felt good most of the way. As usual the first five miles were the toughest. I was OK the first couple of miles but my legs started feeling fatigued early on. Then, just as quickly, I felt fine. I couldn't speed up too much around miles 7 through 9, but I started picking up the speed around mile 10 until the end. Overall, though, my pace was pretty consistent. The first mile was 9:05 then followed that with an 8:14 second mile. My slowest mile was a 9:55 for mile 8. That was due to the goat trail, which I mostly ran but had to walk because of traffic going up. This was the point where I also encountered the overall winner as he ran down the hill ever so quickly. I'm amazed by people who can run down that hill. I slip every time I try to move fast on it. My best miles were the last two, aided by a slight downhill to the finish. Mile 12 was a 7:34 and mile 13 was 7:31. That's a good way to finish, but unfortunately I did get passed right at the finish line by a woman who sprinted by me just as I was about to cross. Show off.

As for my next race, I had hopes that I may PR there, but the way my running has been going lately it's beginning to look unlikely. Work has been incredibly busy and I haven't been able to go out to run. This week isn't looking any better. Who knows though? I did OK on this race, so maybe I'll surprise myself with the next one.
Posted by Unknown at 11:30 PM 1 comment:

The Week in Running

What a terrible of week of running! The thing I feared would happen did happen as I didn't run once from Monday through Friday, unless you count the brief, two-minute attempt on a rickety treadmill at the gym. Monday I actually got dressed to run but just wasn't feeling it and came up with a terrible excuse not to do so. I told myself I'd get up early Tuesday but did not. Tuesday night wasn't an option since I was going to see "Fela!" at the Ahmanson. Wednesday night I attempted to run at the gym in Koreatown which has equipment that is at least 20 years old yet the gym is always packed. I managed to get on a treadmill fairly quickly but it was a treadmill that probably should be taken out back and put out of its misery. The tread was rubbing agains the machine and squeaked like crazy. I probably would have put up with it a little longer if not for the fact that the treadmill was stuck on an incline and would not go down. The treadmill was fit for a slow walk not a run. I just gave up. Rather than waiting for another, likely equally crappy, treadmill, I just went home. Thursday was another night on the town. FJ and I went to see a terrific concert by M83 at Club Nokia.

Thankfully I salvaged the week with two great long runs this weekend. Sonia, Rob, and I ran 13.1 miles on Saturday followed by a 10 miler the very next day. 23.1 miles in two days. It's a decrease from the 31 miles the previous week, but considering where I was I'd take it.

This week also isn't looking promising. Work is incredibly busy and I'm getting stressed. I'm hoping to get runs in to help alleviate the stress, but we'll see how productive I am. I'd like to at least get two or three runs before the half marathon on Sunday. I have no big expectations for that race since it's a difficult course, but I'd still like to finish under 2 hours, hopefully closer to 1:50.

So to recap, the goals for this week are two or three runs. I'm thinking I'll head to the gym in downtown to do some speedwork on the treadmill especially if work keeps me in the office until late (like tonight).

Last night I got home at 8pm and promised myself that I would go for a six mile run. I got dressed and put my watch on, when I noticed that it kept saying the memory was full. I thought the Garmins automatically deleted old records when space is needed. It even said so on the instruction manual. I had to have my watch or else it wouldn't count, right? I fiddled around with the watch until I finally figured out how to delete a few runs manually. This took but a few minutes but by the end of it, even though I was already dressed, I just didn't feel like running. In return I promised that I would run before work at 6:30am. I even upped the stakes by promising to donate $20 to a charity should I fail to do so.

Of course, I did not run this morning. My alarm went off, and I knew I would not get up.

This happens all too often. Even as I was negotiating with myself last night I knew I was just being lazy--it's too late to run, it's too cold, it's too dark, I'll do it tomorrow, my leg hurts. All excuses. The watch thing was an obvious excuse. I could have run without it as I did the other night and all the time before I bought the Garmin. Instead I used its malfunction as a reason to postpone and ultimately cancel my run

In any event, my only other likely window for running is tomorrow night. I could try and force myself to run in the morning, but weekday mornings are typically no-go's for me. So after a good start to the year last week, I'm taking a step back this week.

The Week in Running

It wasn't a bad start to the new year. I ran a total of 31.84 miles this first week including a couple of ten milers. Saturday's 10 miler was particularly good. It started off badly when I had to stop a mile and a half into the run due to a coughing fit. I couldn't seem to take a deep breath. This is a recurring problem for me. I feel like an old guy with a lot of phlegm for the first few miles during my morning runs. My pace was about 10:00 for the first four miles, but I brought that down with a fast second half, finishing at about a 9:15 pace. In fact, I clocked in my tenth mile in 7:45.

Last night's run, though, was shorter but I just felt sluggish through all of it. Still, I was glad I overcame my tendency for laziness and got the run in. I'm planning to run again tonight and I hope it's a lot better. I need to get this run in tonight because it's going to be a busy week. I'm sure work will be crazy but I also have a couple of fun events. I'm seeing "Fela" at the Ahmanson on Tuesday night and then on Thursday I'm seeing M83 with FJ. It's possible that I may not get another run in this week! Hopefully that won't be the case. The Rose Bowl Half Marathon is in a couple of weeks and I need to stay in shape since that won't be an easy one.
Posted by Unknown at 7:17 AM No comments:

To motivate myself in 2012 to keep running I've decided to commit myself to running twelve races in 2012--12 for '12--catchy, huh? The rules are simple: one race (half marathon or greater) a month. Davey broached the idea one night and I think he's committed too. Right now I'm booked for the first three months. I have the Rose Bowl Half Marathon in a couple of weeks, the Inaugural Pasadena Rock N' Roll Half Marathon next month, and the L.A. Marathon in March. The rest of the year is still open, but I did apply for a spot in the New York City Marathon in November. I'll probably stick a lot of cheaper, local races since this could cost me a pretty penny if I tackle too many big, out-of-town races.

It's sort of an experiment, too, really. I know the idea is to run fewer races and train more, but lately I find myself lazy about running unless there's something I'm training for. Not to brag, but I think I've taken running half marathons and marathons for granted since I know I can do them. For the LA Marathon in 2011 I started training in January. It's turning out the same this year. At least if I commit myself to a race a month I will (hopefully) consistently run. Maybe it will mean I'll finally lose the weight I've been trying to lose for so long. Nutrition should really be a part of my training, but I love to eat too much. I'll tackle that some other time.

As for 2011, it was a slow year. As mentioned I ran the Los Angeles Marathon. It was a memorable one to be sure with the crazy weather. I still managed to run a respectable time of 3:53 but a new PR has eluded me once again. That's a continuing goal this year. 3:45! I also ran the Los Angeles Rock N' Roll Half Marathon this year with little to no training and it showed in my finish time of 1:50. I also ran another Ragnar Relay this year, and that was a blast. As much work as it is and as uncomfortable riding around a van for a day may be, these Ragnar races are just fun. I'm thinking I may take a break from relay races this year, but I'm not making any promises. If someone plans it all out and all I have to do is show up, then count me in.

To start off the year, here's a picture of me and some of my regular running gang who help inspire me to wake up early on Saturday/Sunday mornings. We ran the Rose Parade route early on Monday morning and--as usual--had a great time. 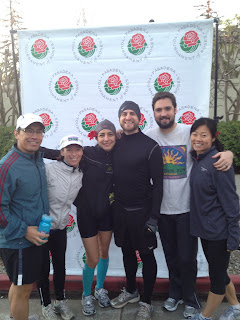