This past weekend's hike up to the summit of Mt. Baldy must have lit a fire in me. I just have an urge to do more hikes--right this moment. I started looking up other tough but fun hikes around the area and checking out Modern HIker's thoughts on the best hikes in southern California. If you haven't, check out how cool Google Earth is. This is Mt. Baldy on Google Earth. 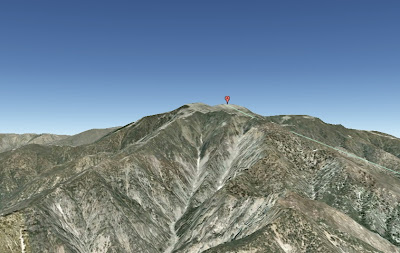 To the top of my list zoomed Mt. Baden-Powell. The only drawback to that hike is that it requires a 50 mile drive on a mountain road. That's not so bad, though.

This weekend Kevin and I will tackle a hike I've wanted to do in a long while: the Bridge to Nowhere in Azusa. This one isn't too hard; it's just long. It should be a lot of fun, though. Eventually I'll work myself up to tackling Mt. Whitney or Mt. Shasta. I'll need some gear, though. Shopping spree!
Posted by Unknown at 11:54 PM No comments:

I've been mostly inactive the last couple of weeks. Since the marathon I have run once. This weekend must have been a shock to my body then as I took it on a rigorous 10 mile round trip hike up to the summit of Mt. Baldy and back down again. Six hours of climbing and resisting the pull of gravity as we navigated the steep mountainside on the way down. It was a fun but strenuous hike but well worth the effort. It wore me out so much that I crashed at 10 pm. Granted, though, that I woke up before 5 am to set off on the hike.

The next day my legs were somewhat sore, but I woke up early any way and met up with the gang for a run at the Rose Bowl. 7 miles. We took it easy in the first half, but in the second half we stopped taking walk breaks and in the last half mile we were sprinting. I started my sprint too early and couldn't maintain the pace towards the finish. I had passed Rob and Rachel but they eventually passed me again before we crossed the finish line. I should do that more often, though, if I really want to build up my speed.

After all that activity, the soreness caught up with me last night and I started to feel it more in my calves, hamstrings and butt. It's a nice soreness. Tonight I'm hoping to get in a short run, but we'll see how I feel after trivia.

Pics from the hike: Posted by Unknown at 5:25 PM No comments:

For the last week since the marathon I have been on a weeklong running vacation. I actually hadn't planned on taking a hiatus, but as an excuse for my unwillingness to run on Thursday, I decided that I was taking the week off. It's not a bad idea. I earned the right to not run for a week. The only pang of guilt occurred when I thought about the fact that I barely ran the last couple of weeks anyway, but that is neither here nor there.

Today I ran for the first time--just four miles to the Hollywood Farmers' Market. I started a little later than I would have liked and by then what haze there was had burned off. It wasn't too hot, though. I tried running a fast pace but I was out of breath quickly and had to walk a bit after a couple of miles. The route was also uphill on Rossmore from 4th all the way to Sunset. It wasn't the best run, but it's good I forced myself to run even though I was desperately trying to think of an excuse out of doing so.

After my disappointing run in San Francisco, I decided I need to get a little more serious about training. Lately I've been in the habit of "maintaining" rather than "improving." I've contented myself with running the same pace for the last year and haven't forced myself to improve. It's really laziness on my part and also an aversion to discomfort. Well, it's time for me to get uncomfortable.

As part of this change in attitude, I've decided to set an immediate goal for myself for my next race, which will be the Los Angeles Rock N Roll Half Marathon in October. For that race, my goal will be to run a personal best under 1:40. This should be doable since my best half marathon was 1:41. I'll only have to shave a couple of minutes. I'll just need to get myself in the same shape I was when I ran that time in San Jose almost three years ago.

Other minor goals: 1) get a watch 2) renew my gym membership 3) run at least three times on weekdays.

One last thing, here are the only good pictures of me from the marathon this past weekend: 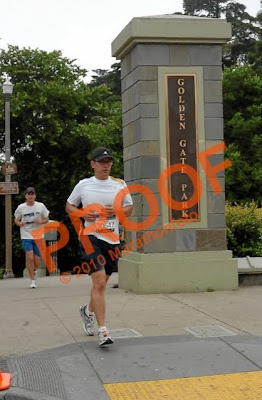 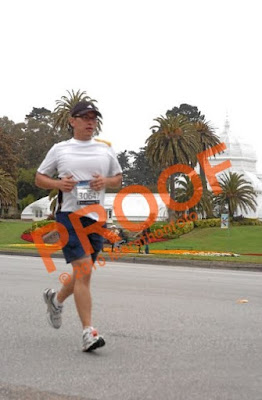