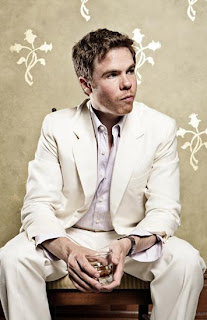 Thursdays this month have turned into an El Rey night for me. The last three Thursdays have found me at the El Rey for a show, two of which I saw for free. Two weeks ago it was the power pop of Rogue Wave, last week was the raw bluesy folk of Two Gallants, but last night was the best yet: Josh Ritter.

I've seen Josh Ritter a few times now and each one has been successively better. Last night was incredibly triumphant. The main thing I took away from Ritter's previous performances is the joy he exudes performing live. With his ear-to-ear grin and aw-shucks attitude, it makes you wonder at first how genuinely grateful he is, but by the end of the night he wins you over with a performance equally ecstatic as his smile. He was at his effusive best last night.

Ritter worked with a full band last night, which included a horn section. His new album, The Historical Conquests of Josh Ritter, is a rollicking follow-up to the more somber and elegant The Animal Years, and the looser sound was in evidence last night as Ritter favored the rocking songs of the new album as well as the ones from his previous work. With more exuberant songs in hand, Ritter was able to finesse the setlist and pace the evening extremely well, never sagging for a bit. Ritter and his band, which includes an energetic new drummer, the boyish and appealing Liam Hurley--who is also credited for "yelling"--opened forcefully with "To the Dogs or Whoever" and went straight on to "Wolves" from The Animal Years before slowing down a little with the lovely "Here at the Right Time."

After this brief interlude, the full band came back on along with the horn section and sent the evening soaring with "Right Moves," "Mind's Eye" and "Rumors." They disappeared after playing the intro to "The Temptation of Adam" but came back with more later with "Empty Hearts" and "Real Long Distance."

If it's even possible Ritter seemed to be having an even greater time now. He knows when to be cheeky and when to rein it in. In the middle of "Harrisburg" he launches into a brief cover of Modest Mouse's "Tiny Cities Made of Ashes," which doesn't quite make sense when I think about it but seemed appropriate at the time. The main set ended not with "Kathleen," which as an indefatigable crowd-pleaser instead became the penultimate song, but with the slower but exquisite "Lawrence, KS." Perhaps it was just Ritter being cheeky again, tweaking our expectations just a bit.

The encore was a mic-less cover of "The River" followed by the rousing "Lillian, Egypt." It was Ritter at his best.

The El Rey crowd can be quite noisy during a musician's set as the bar is just in the back and the conversations carry. But last night, whenever Ritter performed the quiet songs, it was as hushed as I've ever heard the El Rey. Any minor noise was met with a chorus of "Shh" from the crowd. Quite nice, I say. I also finally figured out where Josh Ritter's album should be marketed. Starbucks, yes, but judging from the crowd, the record label should consider placing some copies of his album at REI. Lots of physically-active types in there and hiking shoes. Just an observation.

Lucky for me, I get to see Josh Ritter again tonight--for free!--at the Natural History Museum.
Posted by Unknown at 12:25 PM